The brand was created in 1938, but its operation was rather modest, so the need for a logo actually did not arise. By 1958, however, it was obvious that Samsung needed its own insignia. The logo featured 3 stars, 3 stripes and wheat plants inside a circle shape. The stars were connected with the name of the company, while the wheat plants emphasized its agricultural roots.
With the introduction of the brand’s first black and white television in the 1960s the need for a logo update became obvious. Although the new emblem was based on the same visual metaphor – three stars in a circle – it looked different, cleaner. Also, a wordmark appeared next to the symbol.
The Samsung logo introduced in the 1980s looked more up-to-date. The lines became sharper; the negative space was successfully used.

The original logo was pretty cluttered and bore nothing in common with the current Samsung logo. You could see three stars, three stripes, and wheat plants inside a circle.

The stars adopted a more refined and unique shape. The emblem now looked more abstract and less cluttered. Next to it, the lettering “Samsung” in black was placed.

The circle and the square, in which the stars had been placed on the previous emblem, disappeared. There were now only the stars and the brand name, which was given in shorter letters.

The star design was also used as a standalone emblem. In this case, the symbol was enlarged so that every detail could be clearly seen.

The emblem featuring the three stars remained unchanged, while the wordmark was slightly modified. In comparison with the previous one, it looked somewhat bolder and shorter.

This is the year when the current Samsung logo was born. You can see the now-familiar bold sans serif letters inside a blue ellipse. What is most important, the iconic “A” without the horizontal bar appears on this version.

The design team decided to dismiss the ellipse. Today, both the ellipse logo and the logo without the ellipse are used. One of them is a primary logo, while the other is a secondary one. 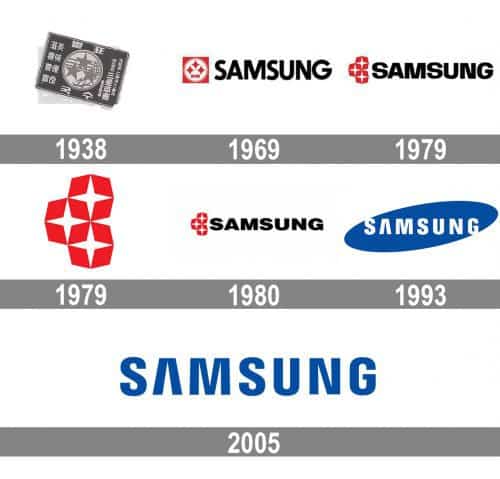