Mazda is a Japanese brand of a car manufacturer, which was established in 1929 in Hiroshima by Jujiro Matsuda. The company presented its first automobile in 1931. Today it is one of the top 15 automakers in the world by volume and one of the most selling car brands in Asia and Russia.

The brand’s name is derived from the name of its founder, Jujiro Matsuda, which European pronunciation is Mazda. But it also has another meaning — in Asian civilizations, there is a god of harmony, wisdom, and light, Ahura Mazda. The brand’s founder was a very spiritual man, so Mazda’s name and logo are considered to have a lot of hidden meanings inside.
In the first years of its history, the company was focused on manufacturing tools and heavy machinery. So the original brand’s logo was simple and minimalistic.
The Mazda logo was changed many times through its history and came to the version we all know today only in 1998. The current logo is a stylized letter “M” emblem, which is placed above a wordmark in a custom typeface.

The Mazda emblem is a rounded frame with a “V” shape figure inside. It is a stylization of the letter “M”, which stretches its wings, reflecting the company’s ambition in moving forward. It represents the brand’s creativity and innovative approach, being one of the most recognizable symbols in its industry.
1934 — 1936
The first Mazda logo appeared in 1934 and it was just a simple wordmark, italicized with elegant lines of the letters. The company’s first three-wheel truck was launched in the same year.
1936 — 1959
The symbolic geometrical logo, which was inspired by the Hiroshima emblem. Three parallel lines, forming three-letter “M” in its middle points. Three “M”s stand for Mazda Motor Manufacturer. The icon, which represents the flow of Hiroshima river, resembles of aviation.
1959 — 1975
This period’s logo is showing the letter “M” in a more soft way. It was released which the first Mazda passenger cars and was aimed to be eye-catching and memorable. The bold lines of the letter in a round frame reflect the powerful brand, which values design.
1975 — 1991
For almost 30 years the company used a letter mark logo, with no additional details and symbols. The typeface of that logo became iconic and is being used by the brand even today. It is futuristic and bold, instantly recognizable, and has no analogs.
1991 — 1998
Mazda decided to come back to symbolism in its logo. The brand used a diamond-shaped emblem, which was a representation of light and sun. Its first version was geometrical and in 1992 it was redesigned using smooth and soft lines. The 1992 Mazda logo is the basis of the current logo we all know.
1998 — 2015
The well-known today brand’s symbol was created in 1998. The “V” shapes wings, representing “M”, in an oval frame, reflecting the brand’s flexible thinking and vitality. It celebrates movement and looking into the future. It is progressive and stylish.
The brand’s nameplate from the 1970s is also here. It is placed under the emblem and is executed in a bright blue, evoking a sense of flight.
2015 — Today
The current Mazda logo is a slightly redesigned emblem from 1988 and a wordmark, where all the letters except “D” are in the lower case. The logo is modern and sophisticated, which is elevated with the silver-gray color palette. It is neat and futuristic, showing all the best sides of the brand and its values. 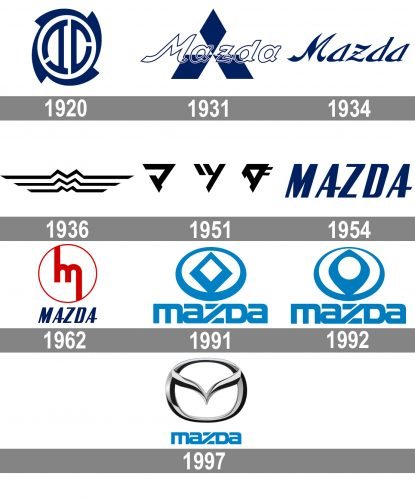 Trademark Expert
Nujud Yaziji
Available
Hi, how can I help?
Go to Top