Each of the dots on the Domino’s logo symbolizes one of the first three stores the restaurant chain had in 1965 when the emblem was created.

Originally Tom Monaghan, one of the company co-founders, was going to add a new do every time news was opened. However, the unbelievable success of the franchise resulted in the very fast Domino’s expansion. By 1978, there were already 200 stores. Who would put so many dots on the company logo?

Evolution of the emblem

The earliest logo, which was introduced in 1960, featured two dominos positioned horizontally one above the other. The top one (red) contained three dots, while the domino below it sported the lettering “Domino’s Pizza” against the blue background.

As a result of the 1977 redesign, the emblem was flipped on its side, the typeface was altered, the colors grew brighter, and there were also a couple of other subtle modifications. One more logo update took place in 1996 when the symbol was rotated once again.

Following the change of the restaurants’ name to simply Domino’s, the blue rectangular shape and text inside it disappeared. Now, the logo consists of only one domino (blue and red) and the name of the company next to it.

The typeface featured in the 1996 logo looks very much like Futura Condensed ExtraBold, while the current wordmark uses a version of the Pluto Sans Heavy type created by Hannes von Dohren.

The color scheme has stayed basically the same since 1960, with a couple of shifts in the shades. The eye-catching combination of red, white, and blue colors is highly noticeable in itself, yet the shades used in the current Dominos Pizza logo are rather discreet. 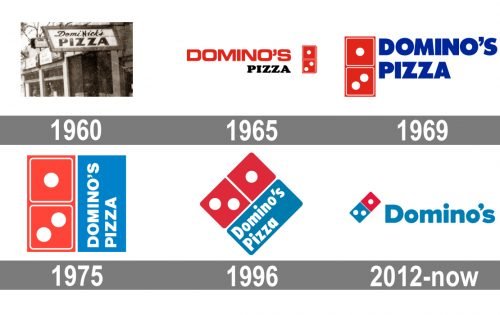 Volvo is a Swedish brand of luxury cars manufacturer. [...]

Ford cars are well known throughout the world as [...]

Renault is a brand of a famous French auto-maker, [...]