Volvo is a Swedish brand of luxury cars manufacturer. The company was founded in 1927 by the SKF Financial Group. In 1999 the brand was sold to Ford, and today Volvo is one of the most popular and respected for its high-quality car producers in the world.

The name “Volvo” means “I roll” in Latin. It was registered by SKF as a trademark for ball bearings, 12 years before the automobile company was established.
The brand is pretty conservative with its visual identity and still uses the emblem, which was created at the very beginning of the Volvo history.

One of the most recognizable car emblems in the world, the Volvo icon features a circle with a diagonal arrow, pointing up and right. It has a dual meaning, as represents both masculinity (it has been a symbol of the war god Mars for centuries) and iron (in ancient times).
The silver color palette of the Volvo emblem only adds power and strength to the brand’s visual identity. It looks sleek and modern, showing the company’s character and values of progress and quality.
The emblem was slightly redesigned during the Volvo history, but the message it contains was always readable.
The Volvo emblem is a perfect example of how one of the most brutal symbols can be executed in a sophisticated and smooth way.

The very first Volvo logo was composed of a blue oval with a golden-brown outline and a wordmark placed in the center of it. The nameplate was written in a traditional for its time typeface with thick white letters. The logo also featured a tagline placed below the wordmark on a thin white ribbon, “Gothenburg Sweden”.
The delicate silver emblem was used on the car grille on its own. It was elegant and simple, a celebration of modest design and perfect taste.

In 1940 the brand designs the base for the logo we all know today. It is composed of a more confident Volvo emblem with a wordmark placed on a thick horizontal line going through the center of the circle with its left half “cut” into three thinner lines, symbolizing movement.
The wordmark is in red all-caps, written in a classic serif font. The contrast of red and silver reflects Volvo’s passion and power.

The most minimalistic emblem was created in 1958. It features the Volvo emblem with a wordmark in a copper palette. Clean lines of the emblem and letters look neat and modern. It is a simple yet very strong visual identity for its time.

The brand switches color palette to black and silver and continues experimenting with the shape. During this period the Volvo emblem is placed inside a black square with a silver outline. The corners are softened, which is perfectly balanced with a rounded-angled base of the wordmark.

The Volvo color scheme is set, now it features silver and royal blue, where the blue is for the rectangular of the nameplate, which is placed inside the Volvo silver emblem.

The current Volvo logo is based on the previous one, but now it is three-dimensional and the lines of the typeface are more clean and confident.
The combination of blue and silver celebrates the Volvo values of quality and design, it evokes the sense of reliability and timelessness of the brand, reflecting its progressive approach and movement, as well as its rich heritage. 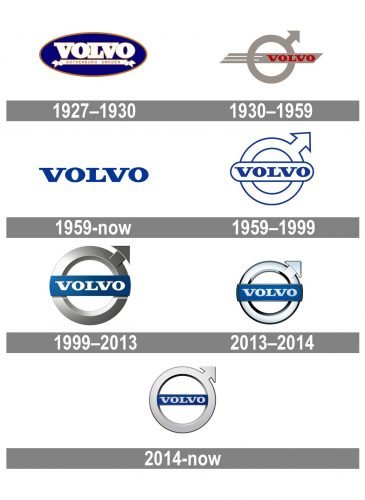