Ford cars are well known throughout the world as fairly simple and reliable. As for the logo, it has, thanks to its immutability since 1927, become one of the most recognizable in the world.

The Ford trademark was registered in 1903 in Europe and in 1909 in the USA. And, since 1903, the company presents a logo in the shape of an oval. He was invented by the chief engineer and he is the designer of the company, Charles Wils. True, the logo looks more like an extravagant vignette, but this is facilitated by the then prevailing artistic style – art nouveau.
In 1912, the logo changed again. Now it clearly shows Egyptian motifs – a pyramid with wings.

The first public presentation of the oval Ford logo occurred in 1907, when the next relic of the “gold rush” was wailing. Therefore, the Ford logo was seen more as a matter of “higher test”.
The Ford emblem, resolved in the form of a pyramid, the customers met with amicable indignation. And all because they found this sign … Masonic.

But already 1927 brought a fundamental change in the logo of the brand. The form of the logo was finally fixed: now the logo is a horizontally elongated oval with a text designation inside). However, right up to the 1970s, most often cars are put on a logo, which is textual writing of a brand extended to the left by drawing out the first and last letters of the name.

It is interesting that the symbol of Ford essentially became the name of the brand itself, favorably “stacked” in a horizontal oval. And if in the first and second logos – vignette and pseudo-hippies – there was a strong influence of fashion, then when a classical and (as it later turns out, unchanged) oval with a font inside

The shape of the Ford emblem has changed slightly throughout history. In particular, this applies to 1912-1927, when several logos were simultaneously encountered – first, openwork, then – calligraphic, the third – “Egyptian”, and a new, oval one. In the mid-1950s, even this form was attempted to improve. And the logo turned from an oval into diamond-shaped in a short time.

Since the main element of the logo is precisely the font writing of the brand, then the font becomes very important. The art-nouveau style is distinguished by the strictness with respect to fonts and riotous graphics. However, capital letters could be extended, and designers are actively using it. But if the font was strict enough in 1903, already in 1909 calligraphy came to replace the hard, albeit exclusive, art nouveau aesthetics. Exquisite writing (it will be partially preserved and later, slightly modifying) has given the brand both originality and strict adherence to the rules.

The logo gained color in 1912. The logo was presented in two colors – orange and blue, and blue was recognized as a more successful color. Silvery letters look great on a blue background, and also symbolize the aristocracy, restraint, and impeccable reputation of the brand. 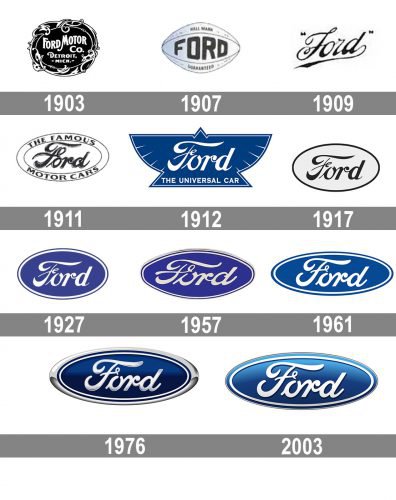